The Jack and Jill lyrics date back to the 18th century.

There are a few suggested theories concerning the history of the rhyme, none of which should be explained to children. Some of the theories are pretty dark and would totally take away from the fun of learning a new rhyme. 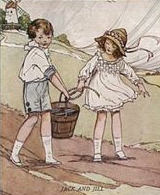 It is also thought to be a simple nonsense rhyme. This is based upon the thought that water runs downhill, therefore no-one would go up a hill to fetch it.

Vinegar and brown paper, however, is an old time cure to help draw bruises out of the body.

Either way, in today's world it is simply a fun rhyme to say. Kids catch on to the verse quickly.

I told my daycare kids it simply meant that climbing or carrying heavy items can be dangerous and that people have to be very careful when doing such a thing.

Typically only the first verse or two is taught to children, but I have included the entire rhyme for those who have interest.

Scroll down past the lyrics to find coloring pages to go with the rhyme.

That said, here's the lyrics...

Jack and Jill went up the hill,

to fetch a pail of water.

Jack fell down and broke his crown,

and Jill came tumbling after.

Up Jack got, and home did trot,

as fast as he could caper.

To old Dame Dob, who patched his nob

with vinegar and brown paper.

Just for reference, the following verses were added in the 19th and 20th centuries. Either-or comprised the third verse and fully explains why children are only taught the first two.

Then Jill came in, and she did grin,

Her mother whipt her, across her knee,

for laughing at Jack's disaster

When Jill came in how she did grin,

Mother vexed did whip her next,

Simply click on the activity of your choice to open the file in PDF format. You'll need to have Adobe installed on your computer to see the files. If you don't have it, you can get it free at get.adobe.com/reader/ 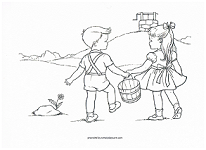 from jack and jill lyrics to nursery rhyme main page

back to home page